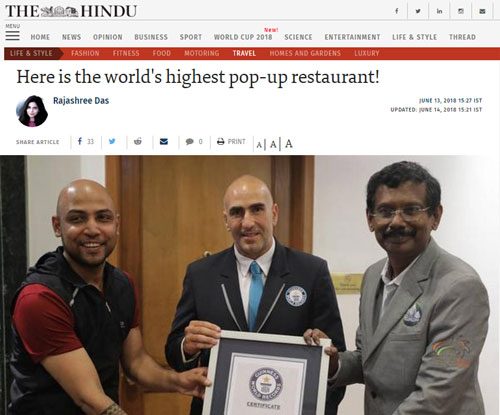 Project Triyagyoni was certified by Guinness World Records as the world’s highest pop-up restaurant at 5,585 metres, the first record of its kind https://t.co/QJ4Wp7WueP

It’s our pleasure to introduce you to Project Tiryagyoni. We launched this project with the aim of setting up a pop up Indian Fine Dining Restaurant and cooking Indian fine dining meals at the earth’s highest altitude (Mount Everest Base Camp). We attempted at setting a Guinness World Record. And this demanding project succeeded in its endeavor to create a world record. So here we are, delightedly sharing with you the project’s vision, mission, how it all started and how the Guinness World Record was created!

Vision and origin of Project Tiryagyoni

Chefs Soundararajan and Sanjay Thakur conceptualized an experience that created history and a Guinness Book Record for the highest pop-up restaurant. Chef Sanjay Thakur while trekking in the midst of Himalayan soil sowed the seed for Project Tiryagyoni in 2016. He realized the impact forests had on our future and appreciated an urgent need to promote them. There is a plethora of indigenous valuable ingredients offered by mother nature. One could witness a slow and continuous depletion of the treasured reserves that had an adverse impact on climatic changes. Highly prevalent unscientifically framed organic dining concepts have swept over the global market. This made Chef Thakur conspicuous to the fact that a positive intervention is imperative.

Being a member of the Indian Federation of Chefs Association, Chef Thakur took up the concept with Chef Manjit Gill and Chef Soundararajan. The incubation of Project Tiryagyoni commenced, with enthusiastic support from them. Project Tiryagyoni is dedicated not only in conserving mother nature but also reviving the respect of long-lost Indian and Nepalese cuisines that has an illustrious 8000-year history. Chef Thakur also wanted guests to have a memorable dining experience at the highest altitude.

10 diners were a part of this record-setting expedition between 24th May – 05th June 2018, and they experienced the culinary journey that will have a well-researched and crafted menu by the two renowned chefs. This surely exalted dining experience to new heights.

Foraging was the initial part of the trek where the group will trek their way to the base camp collecting valuable herbs and other ingredients that nature offers. The fresh unadulterated ingredients will be blended in a twist of spices where cuisine is not bounded by boundaries, to serve an exotic meal at the world’s highest altitude.

Here are pictures from the exquisite meal that was prepared and served at the fine dining restaurant.

On behalf of the Himalayan Trek Team,